If you want to be successful, then you have to commit to being successful. Yeah there are those out there who are lucky, but I don’t want to depend on my luck for my business. I want to reach my goals with an intentional activity that says, “This is where I want to be next year, and my team and I are 100% committed to it and by golly we’re going to reach it.” So today I’m going to talk about how to apply the following principles to your business so you can ensure your business will thrive no matter the shape of the market:

Hi, this is Dr. Bruce Baird, with the Productive Dentist Podcast. And this is episode number 85. And we’re going to talk today about building your plan. You know, it’s kind of interesting, with COVID. And through this last eight months, you know, it was the first time for many that we actually had to work on our business.

Meaning, you know, most dentists open up your business, and once you start, whatever it is you’re doing, once you start your marketing, or start going out in the community and doing all the different things that you’re doing to try to build your business. You really don’t go back and look at the actual business again. And I’ve seen this happen time and time and time again.

But the neat thing about COVID one of the few neat things, not that that’s a decent way of saying it, but one of the things that was forced on us from COVID was many people thought they were going to lose their business. When you’re shut down for a month, two months, 10 weeks did you have a reserve set aside for something like that? And what I can say is most people did not and do not. So what we’ve done is we you know, we’ve had to step back and say oh my gosh, I’ve got to figure out exactly how I’m going to survive this, which is actually something you should be doing. Not to survive it. But to thrive in any market time in any market place.

We need to be thinking about our business, across the board and you’ve heard me talk about the dental roller coaster, going through the process of I wrote, I wrote a five part series for dental economics that was about the dental rollercoaster and, and it was really, it is such an up and down business. And it doesn’t have to be, you know, it does not have to be, it can be a steady growth that you see every month and every year. But it’s all has to be part of your plan. You can’t just say, oh, we’re going to grow every year. Or what you can’t do is say, I’d like to grow 10% this year. And you know, we’re coming up towards the end of 2020. And you can’t just say I’m going to grow 10% next year and then expect that to happen. If you don’t really have you know, a plan for it.

Or is this just going to happen because your marketing more and the growth is going to happen anyway. And that’s where a lot of dentist offices grow. They already have a good plan. You know, they have a good marketing plan. They’re out there in the community. They’re getting good referrals and good. You know what we call raving fans. And so your business grows, but it’s not intentional.

And then when something happens, you don’t really know why it happened. And let me give you an example. And we’ve talked about predictive analytics, but by knowing all of your expenses by knowing everything that you’re doing, it allows you to set goals for your team. We set our bonuses up to determine, you know, what, what do we need to do every single month to cover our expenses but to continue to grow our business. And that is part of this, we call it right now where we’ve been doing a program with Productive Dentist Academy foundations course it’s an eight week course.

And really in the last two weeks, we’ve been working with dentists to build their two-year plan. And then there’s where do I want to be, and you have to break that down, you have to break it down into quadrants, or, you know, quarters, you break it down into by the month. And I personally break things down into a daily goal, based upon productivity per hour, most of you know that that’s kind of my philosophy has always been productivity per hour.

And it’s kind of funny when, when Jeff Buske, my partner and I first became partners 16 years ago, I would you know, at the end of the year in December, we would set out our template. And our template would be this is what these are the days were working. And this is what we’re committed to producing in the practice.

And it’s something that you can do if you plan for it. But the funny part is Jeff and I would plan for the year, these are the days I’m working. I know I want to go vacation this particular time. There’s, I want to go to the American Academy of Implant Dentistry meeting that is in September or October, I’m going to do the, you know, whatever meetings that you want to do, pick them out a year ahead. Now, that’s nice if you’re able to stick to that, you know, but do we are, you know, some changes happen.

Now, why would you do that you’re an owner, you should get everything well you do but I want to set a goal for my team. So that we reach that goal so that I make at least 35%. My associate makes whatever percentage I’m paying the associate. Everybody in the office gets paid everything. And at that point that becomes what we call and we’ve talked about it in past our profitability incentive point that profitability incentive point is its massive. It’s a massively important so we would say all these things and we would do it all.

And Jeff would be going wow, you know, that’s a lot to look at. But it only took us two hours over, you know, over a bottle of wine. And then next year, we would do it again. And what he found was that the next year, guess what? We nailed exactly what we said we were going to do. We nailed it. And usually, we were anywhere from five to 9%, higher than what we had anticipated. So if we anticipated growth of 5%, we wouldn’t be at 10 or 15%. growth. And we continue to do this year after a year.

But how did we do it? Well, we had to know what our expenses were. And we had to commit to a specific amount of productivity, that each one of us were going to contribute to the office, if you’re in a solo practice, you got to commit to yourself. Now, what happened during the year when I had a vacation that I scheduled that I now want to take an extra week I look at these things, and is it about the production per hour, you know, if I was doing production per hour of 1200, dollars an hour, you know, or, or 800 an hour or whatever it was. And I’m now going to work less hours guess what has to happen, my production per hour and the amount of time I’m there that month, because I’m committed to the number in our office, I was committed to doing 120,000 a month on two days.

Depending upon the cases I had, but what’s important to know is I was committed to 128. So if if I was only working half the number hours, my production per hour had to be double. And so how do you do that? How do you all of a sudden double? Well, first of all, many dentists have high months of production per hour, and then the next is low and the next is high.

Not in our office. Our office was predictable, because my team knows what we’re booking with, knows what we’re scheduling. And I know what I need to do. So I would have cases big cases come in. And I would predict, I predictively looking ahead saying Hmm, I’m going to be two weeks in Greece, at the end of September. So in the first part of September, I need to get this these higher end procedures. Since I would say, Bob, you know, I’d really like to get started on this. Let’s get your tissues healthy. And then let’s do your reconstructive. Let’s do your reconstructive work towards the end of the month, or towards the beginning of September. Would that work for you? Yeah, yeah, that makes sense. And others, I would drive and I would load my schedule based on that.

Now, building a plan, you’re going to build this plan this two-year plan, which is critical. So that, you know, let’s just say in mid 2020, to where your practice is, what your production is, what’s your growth rate going to be? What is your production per hour now, because that’s going to predict, hopefully, what you’re trying to accomplish productivity per hour next year.

And it’s not good enough just to be telling yourself this, your whole team needs to be involved in this conversation. And in the next podcast, I’m going to be talking about you know, marketing and growth. And that’s something that’s really important to understand, how can you augment, how can you help in your goal setting? How can you do things that are going to inherently grow your business.

And when they when your business is growing? Obviously, there’s a lot of great things happening, your team’s excited you get you become a good leader, you know, you’re not stressed, because when I’m stressed, I’m not a real good leader.

Set your plan. Think about your plan and be intentional. This is an intentional activity. It’s not something that just happens most dentists, you know, that come to these programs, and you know, we learn all this new stuff, and they go home and they don’t do any of it. Well, that’s on you. It’s not on anybody else. If you want to be successful, then you have to be committed to being successful.

So hope this was a good episode for you guys and we’ll talk to you next week.

Previous: Episode 84 – So, You Think You Need an Associate
Next: Episode 86 – Foundational Pillars of Success: #7 Achieving Your Plan with Marketing

MORE FROM THIS PODCAST 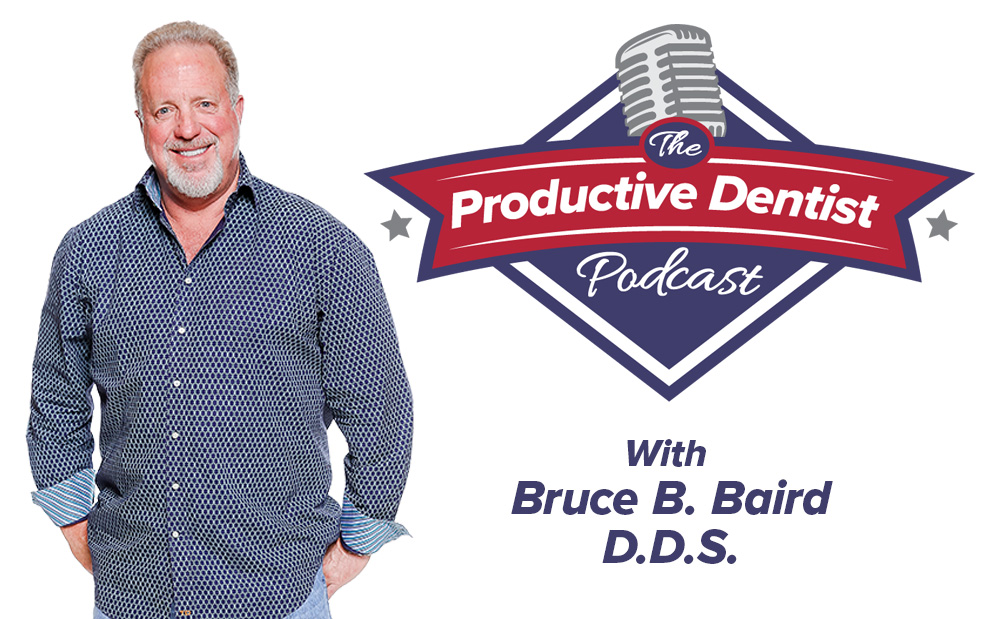 The Productive Dentist Podcast features Dr. Bruce Baird, America’s Most Productive Dentist, as he shares the wisdom and knowledge he has gained in 30+ years of dentistry. A pioneer in dental implants, scheduling, leadership, and practice management, Dr. Baird has a wealth of knowledge he is eager to share to help dentists become more productive and live better lives.

Abundance Mindset: Survival Of The Fittest

How To Get Out Of Survival Mode: Dentist Business Owners Edition